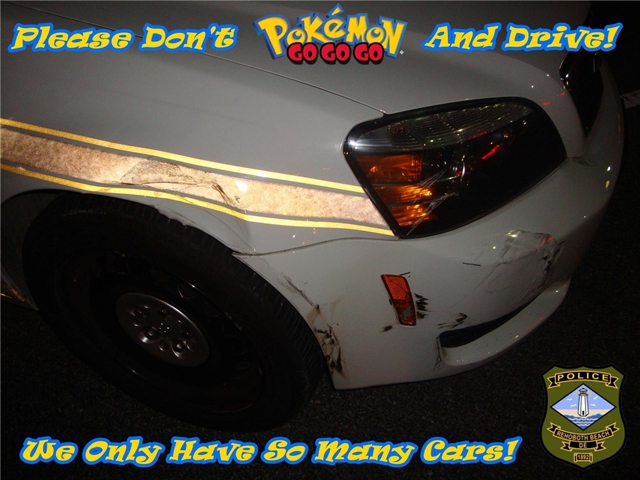 Mark A. Oldenburg, 28, of Dover, Del. was cited for inattentive driving after an attempt to locate a Pokemon Gym in the second block of Rehoboth Avenue caused him to drive his vehicle into a marked Rehoboth Beach patrol car.

On Wednesday (07/20/16) at around 12:05am, an officer from the Rehoboth Beach Police Department was operating his marked patrol car in the left, east bound lane of the second block Rehoboth Avenue when he was suddenly struck in the passenger side front quarter panel by the vehicle next to him.  Oldenburg was operating a silver Hyundai Sonata in the right lane next to the officer when his wife directed him to pull into a median parking space because there was a Pokemon Gym in that direction.  Oldenburg followed her instructions, but failed to check his surroundings resulting in a collision with the patrol car next to him.

Although both vehicles sustained damage, no one was injured as a result of the collision.

Oldenburg was issued a summons for 1 count of inattentive driving and 1 count of improper turn.

The Rehoboth Beach Police Department asks that if you are going to play Pokemon Go, please do not do so while operating a motor vehicle.